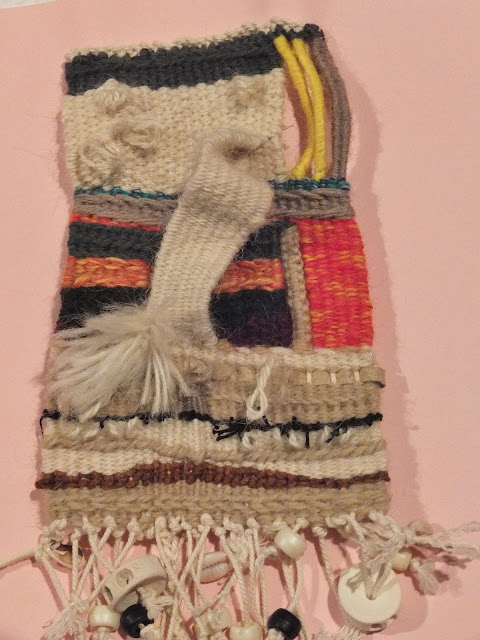 Still can't keep my sides straight ...hmm, maybe that should be my "thing", asymmetrical tapestries! I start with good intention and then before I know it I've become so involved in the process of the weaving, the choosing colours & yarns, the knots & textures, that I forget to keep an eye on the shape of the whole.
Posted by Christine at 3:45 PM 3 comments:

﻿
I hadn't realised how long it's been since my last post. I was really hoping to post updates every week but time seems to fly by.
Anyway, I decided to go with the mangroves as the inspiration for my abstract landscape tapestry. I just couldn't get past them.﻿ 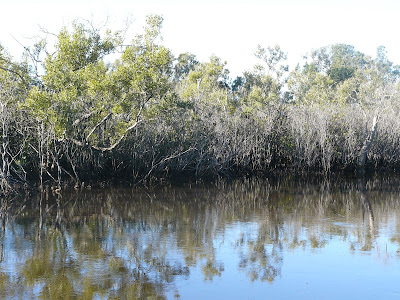 It was Michelle's idea to use a different colour scheme that helped make up my mind. So, I played around with my limited knowledge of Photoshop 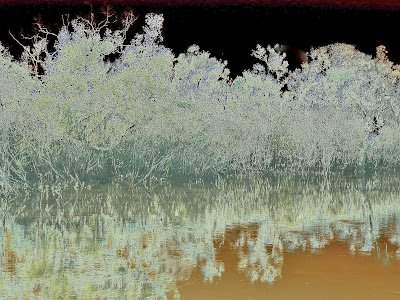 and came up with this 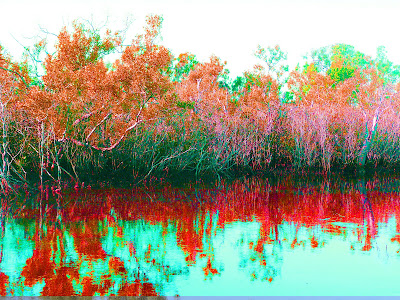 Because of the strong vertical lines in this design I wove the design sideways, which I found challenging. 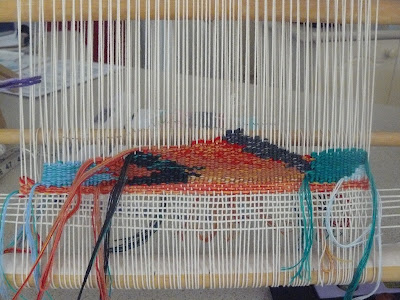 The other main problem I am having is keeping my sides straight and parallel. 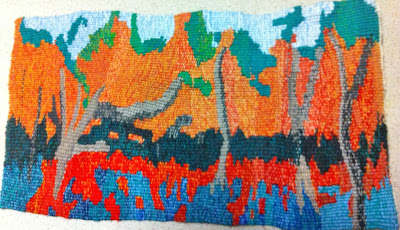 The other exercise I have completed & really enjoyed was the dyeing fibres. I ended up using large jars to dye in and placed them on a rack in an old frying pan filled with water. 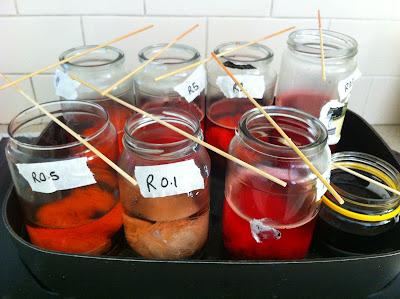 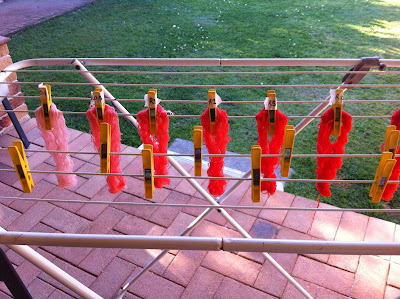 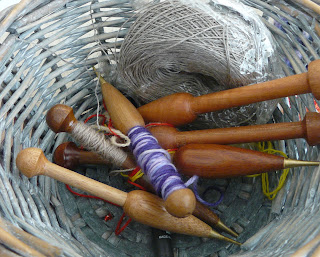 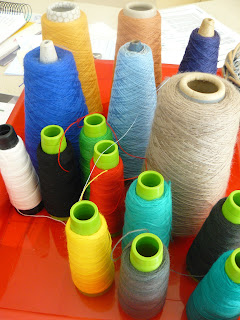 I've taken a break from weaving today to start preparing the dyes required for the next set of exercises. When I first received the course material I had a read through book 2 which contains the information for the Dyeing section for the year and realised I needed to source the dyes & glass bottles early on.


The 2 litre glass flagons were not as easy to find as I first thought (short of drinking a lot). I found a supplier on ebay that sold them in lots of 4. As I needed 5 I had to buy 2 sets. The supplier was a home brewing company. My local home brewing shop doesn't stock them but if you live in a more populated area this would be my suggestion. Seeing them in person I would have been able to select bottles with better lids. (you'd think that bottles meant for brewing/holding alcohol would have decent lids wouldn't you). Needless to say I was disappointed by the cheap lids on my flagons when they arrived (but at least there were no breakages which was my initial concern).

The dyes I bought from Kraftkolour as instructed in the book. I couldn't order directly from their site as the dyes were not listed in the online store section so I sent an email enquiry & ended up phoning and ordering over the phone. 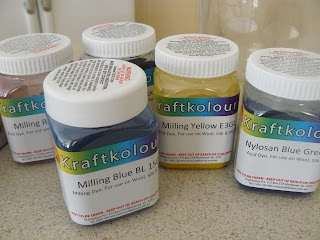 Today I decided to mix the dye powders with water ready for the actual dyeing at a later date.

So, I got out my electronic scale, a measuring jug, plastic spoons and disposable gloves (I recommend changing them as soon as you get dye powder on them, as the smallest amount of water on the dye powder can mean a big mess!). I also rummaged in the back of the cupboard and found some paper patty cake cases. 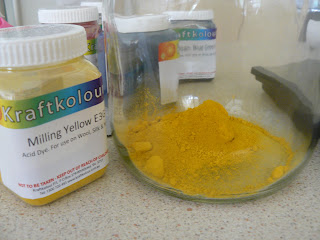 What I did was place the glass flagon (lidless) on the scale and tare the scales (zero it). Then I carefully spooned the dye powder into the flagon a little at a time. It helps to have a spoon that fits into the mouth of the bottle so that there is minimal powder around the top of the bottle. When the 20g was reached (or 10g in the case of the black) I added the water. I had previously marked with texta on one of the bottles where 2 litres of water came up to & copied this on to all the bottles.
The instructions say to use hot water. I boiled the kettle then added boiling water into a pouring jug with some  tap water to cool it slightly. After I added about a third of the water I capped it & gave it a swirl/shake to dissolve the dye powder. Then another few inversions after topping the water up the mark.

All my dyes are now mixed, the bottles are stored in a plastic tub on the laundry bench & I can't wait to actually dye some wool.

Back to the weaving. 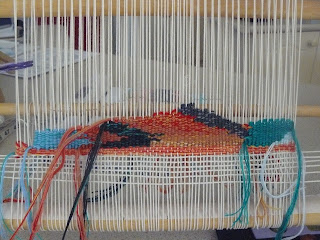 For Misha: http://tafta.org.au/geelong-forum/
Posted by Christine at 3:25 AM No comments:

This week I received my last 2 assignments back with feedback. Both were marked 80/100 (like my first assignment),  so I'm consistent.

Here's the one I forgot to photograph before sending it off. 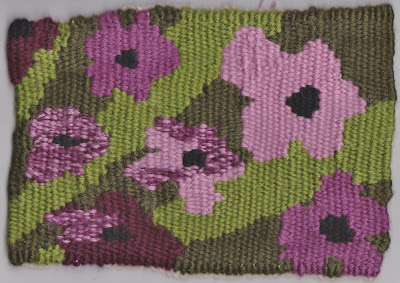 I really have to practice working with colours and having bobbins starting everywhere. It is resulting in not being in the right pass when the 2 colours meet, which is quite obvious in this piece.
I also have to beat down firmer. After watching some videos I had actually thought I was being too harsh in beating down, but apparently not.

I'm having second thoughts about using the mangroves as an inspiration for the next tapestry. The brief is to use multi-colours so I'm thinking the mangroves are not colourful enough. Also I was advised to use some colour in my design (a response to the above tapestry).

(To answer Mishas question about my location: I am in Ballina, on the far north coast of NSW, about an hours drive to the NSW/Qld border. So I am lucky to have mangroves, beach, rivers, mountains, rainforest, paddocks .... lots of natural landscape for inspiration).

Anyone going to the Geelong Fibre Forum in September? (I'm going & will be doing the knitting workshop with Teresa Dair.)

I've been thinking about the next assignment, the abstract landscape, and looking around me for inspiration. I keep returning to the nearby waterway and the mangroves. 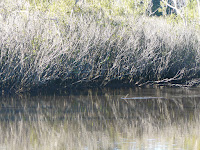 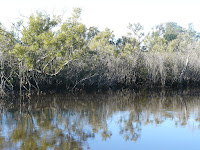 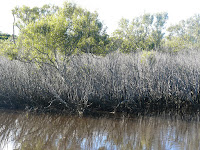 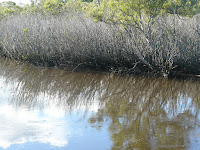 The limited colour palette may be challenging for me but I'm looking forward to working with more "subdued" colours.
Posted by Christine at 8:44 PM 2 comments:

Assessment 3 is a Woven Colour Sampler. I've included a couple of scans so the colours aren't quite accurate (as the complete tapestry wouldn't fit in one go under the scanner). 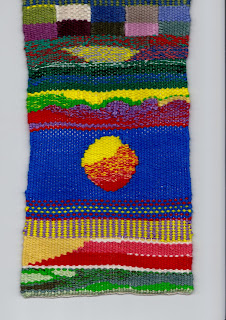 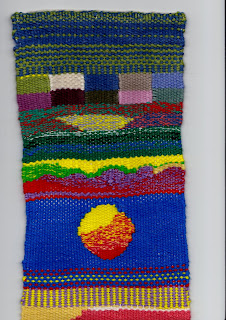 It always amazes me how much "clearer" things seem when viewing a scan or a photograph ....... I find it much easier to see the errors now looking at the scans then I can see looking at the tapestry itself. I seem to have missed quite a few warp threads in this sampler.

No feedback on the last assessment yet, but I think I'm improving each time. Now to warp the larger loom for the next assignment.
Posted by Christine at 4:07 AM 1 comment:

diploma of Tapestry* (21870vic)
OC OL
if you love the rich, tactile qualities of
textiles, along with the image making
qualities of painting and drawing,
you will love woven tapestry and
all that this course delivers. Offered
by correspondence, this course is
accessible to you, no matter where
you live in the world – and because
the recommended mode of study is
part-time, you can combine it with
other commitments in your life. apart
from structured learning activities,
our students find the friendships and
professional networks they develop
through the course are invaluable and
provide ongoing support long after
the course has finished. this course
is ideal for people with an interest in
developing high-level practical and
conceptual skills, interpretive skills and
development of personal imagery.
graduates will hold a nationallyrecognised
qualification and acquire
high level skills that may help them to
move into areas of employment within
the arts industry – as a studio tapestry
artist, workshop weaver and community
artist or to pursue self-employment or
advance to further study